TL;DR There’s a subtle bug in BSON-ruby implementation, leading in best case scenario to low-severity DoS, but most likely to critical BSON Injection (similar to SQL injection) - depends on gem versions you use.

3 years ago I wrote a blog post about broken regular expressions in Ruby, ^$ meaning new lines \n. Back then I was only able to demonstrate XSS on Github and other websites using “javascript:a()\nhttps://”. I had a feeling there are much worse use cases of this vulnerability and here it is.

BSON is a binary-encoded serialization of JSON-like documents. MongoDB uses BSON as the data storage and network transfer format for “documents”.

Mongoid is an ODM (Object Document Mapper) Framework for MongoDB, written in Ruby. Mongo Mapper is another ODM but less popular one.

Moped gem is A MongoDB driver for Ruby.

So Mongoid uses more low-level adapter Moped which uses BSON-ruby (but used to have its own implementation). Mongo Mapper uses Plucky for parsing ObjectId, which also uses BSON-ruby.

Most likely you’re using Mongoid or Mongo Mapper, but technically the vulnerability is in legal? of BSON::ObjectId.

A Tale of One Regression

legal? was created in Moped::BSON on Jan 23, 2012. It intended to verify the _id from user input is hexdecimal and is exactly 24 symbols. It looked like this: 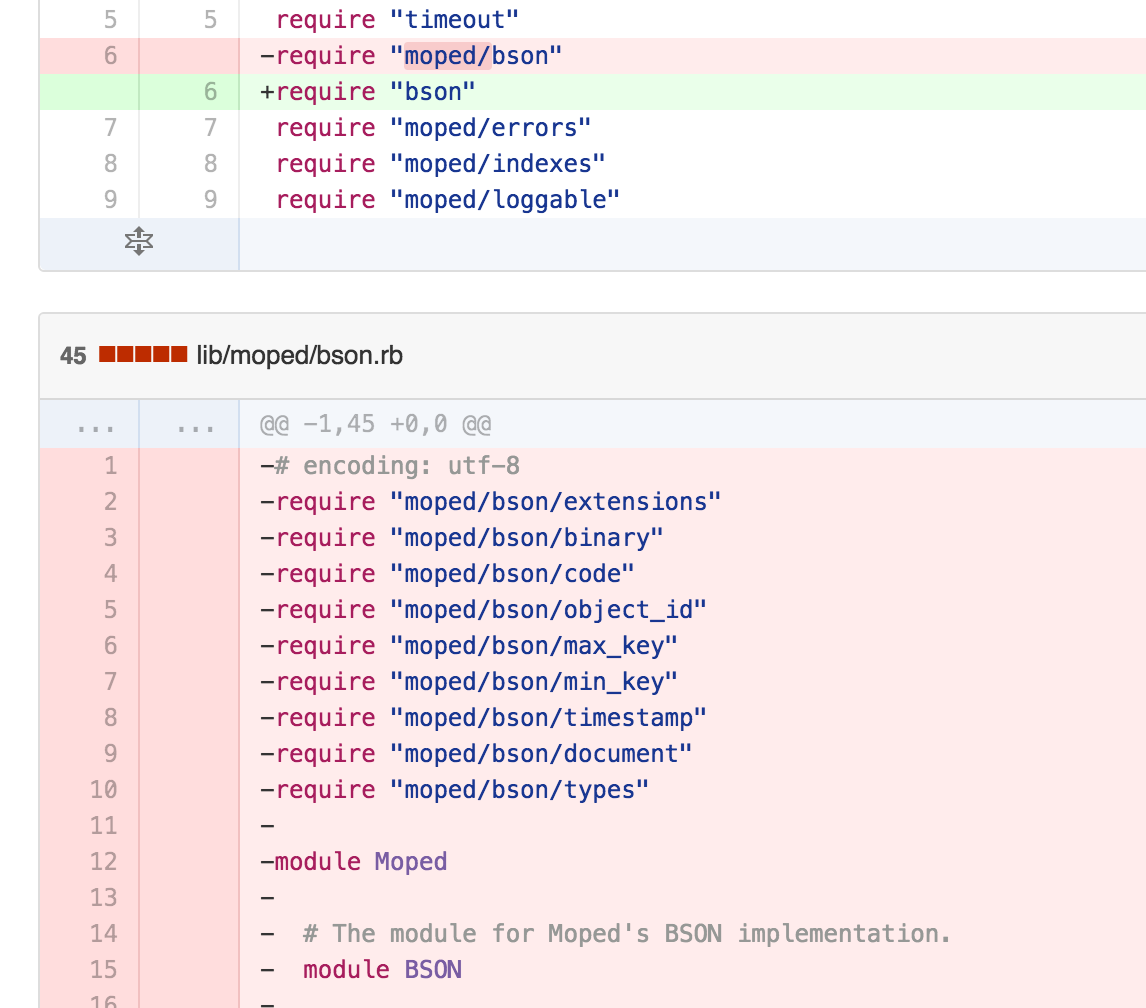 The legal? method successfully migrated to mongodb/bson-ruby before that (on March 3).

I see, you’re getting bored. Run this code to see if you’re vulnerable:

And use this patch if you indeed are! Don’t forget to alert others.

If you’re lucky enough and use old version of Moped, only light version of DoS is possible.

Wait, did I mention another reason why Regexps in Ruby are horribly designed? There’s \A meaning the beginning and there’s \Z meaning the ending… or a new line. You’re supposed to know it. Because only \z means the ending. But most people don’t care the last \n.

So if you send something like aaaaaaaaaaaaaaaaaaaaaaaa%0A (with trailing \n), the legal? method will still return true because \Z allows the new line. But when Mongo DB receives a corrupted ObjectId it responds with [conn1] Assertion: 10307:Client Error: bad object in message: invalid bson type in object with _id: ObjectId('aaaaaaaaaaaaaaaaaaaaaaaa').

Which would be OK if Moped properly reacted, but currently it thinks Mongo is down and pings it 39 more times with intervals. In other words it keeps the worker busy for 5 seconds and makes x40 requests to Mongo DB. One way or another, it is Denial of Service.

Thanks to @judofyr for the help with this PoC!

ObjectId is unpacked from hex string and injected as-is into the socket (not sanitized for performance reasons, it’s supposed to be valid ObjectId). It breaks BSON format and redefines or defines new parameters of the BSON object.

Implications of this vulnerability can be huge, so patch your systems asap. Another post about dangers of BSON is coming soon, and that one impacts all platforms.