Specially crafted “socket_id” parameter could get us a valid auth for any private Pusher channel of your application and even forge any requests to Pusher API on behalf of your application if it has authentication endpoint for private channels (usally /pusher/auth).

Some channels are public, but most of the time clients need private channels to securely notify their users with messages like “John just sent you $10”.

Every time the user connects to Pusher’s websocket it responds with current socket_id (looks like 45031.26030316). If this user wants to subscribe to private channels (say, private-123 for user_id=123) they need to get signed “auth” object from the server side and pass it to Pusher. Normally it’s a POST request to /pusher/auth?socket_id=45031.26030316&channel=private-123

The server side code is supposed to use SDK. Example for Rails (they all look the same):

With this signature we can subscribe to private-1 or any other channel, sending the last part private-123 of string-to-sign in channel_data parameter (which comes in really handy because Pusher doesn’t verify if it’s valid JSON).

This is how we can subscribe to arbitrary private channel of vulnerable Pusher client. But it’s only the beginning of the story.

Pusher documentation says you need to provide key:secret pair in your configuration Pusher.url = "https://840543d97de9803651b3:8897fad3dbb53ac533a9@api.pusherapp.com/apps/99759" but in fact since https:// is preferred (performance reasons, I guess) SDKs never send the secret in plain text and use a home-baked “signature” gem instead.

That gem signs payloads the same way, with HMAC and API secret.

Technically, every client with Pusher[‘channel’].authenticate on the backend can sign arbitrary string for you. The signature gem uses following format: [request.method, request.path, request.query_string].join(“\n”).

Unfortunatelly method “authenticate” appends the name of the channel so we only can get a signature of following string:

At first glance it looks like a serious obstacle, : is supposed to be URL encoded in query strings as %3A. There’s no way to get this exact string_to_sign on Pusher server side… Oh wait.

There’s another subtle vulnerability in “signature” gem - it intentionally ignores URL encoding, no idea why.

This gem might be used in other projects so this is another vulnerability: if the attacker manages to eavesdrop/MitM a request with user input in some parameter message=%26parameter%3D0%26another_parameter%3D1, the same signature will be valid for message=&parameter=0&another_parameter=1 thus any parameters in the signed payload can be added or tampered with. Encoding is no joke.

Alright, since we know Pusher does not URL encode the query string, we can simply hide the last “:private-123” part in some dummy parameter and send it as a part of the query &dummy=:private-123. Here is my proof of concept.

Using this PoC we can get a list of public/private channels of the victim and send any fake data to those channels. See REST documentation for other endpoints.

Getting XSS on pusher.com using… Pusher

This one is just for fun.

Thinking of what harm can be done with malicious fake messages beyond phishing, I tried to find some Universal XSS and thoroughly reviewed pusher.js, but discovered nothing like that. However, there’s special Console for debugging on pusher.com which doesn’t sanitize log.type before inserting in HTML. 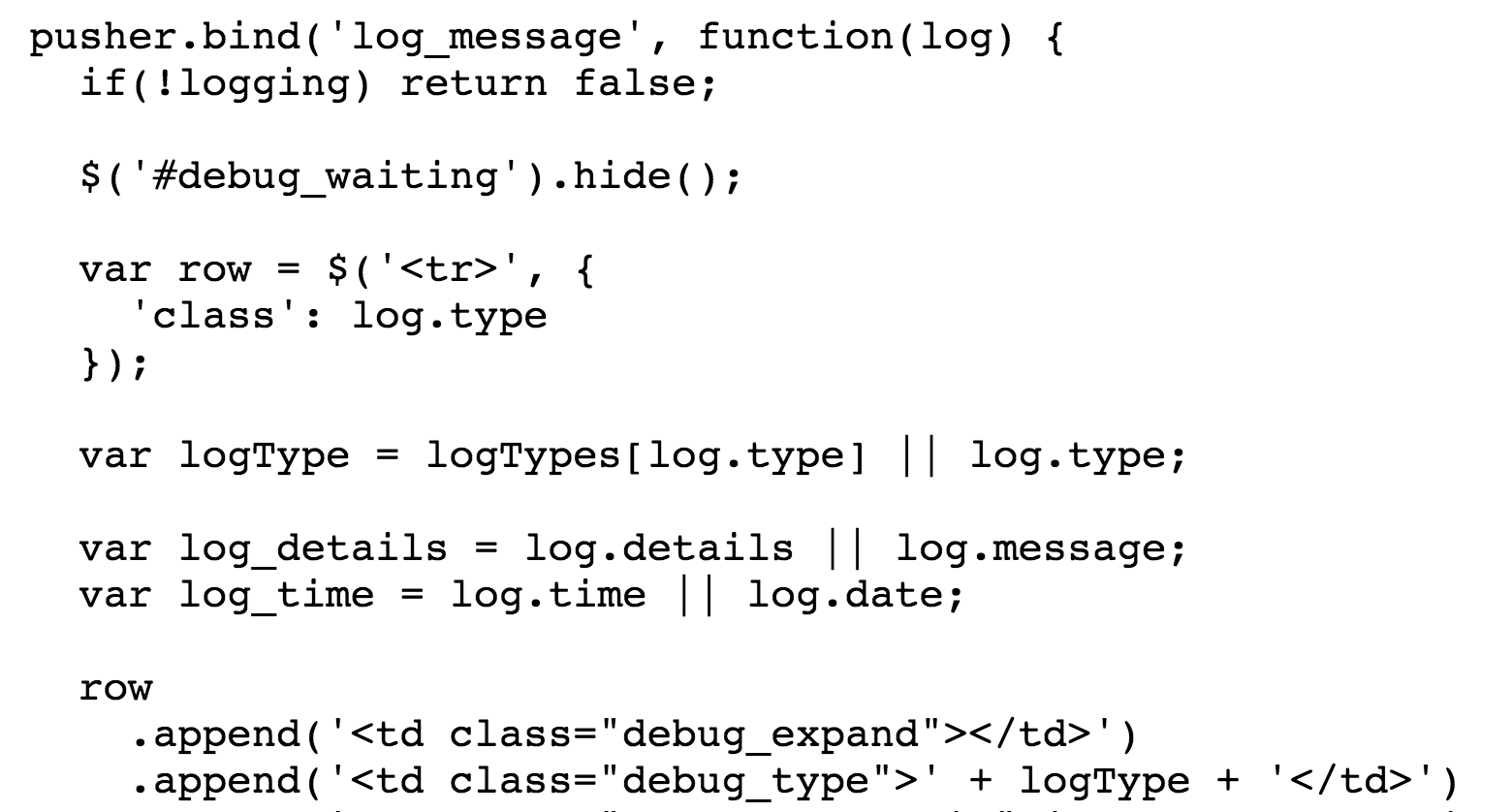 May 8 - the bug was reported to Pusher

May 14 - they fixed SDK libraries and server side was patched to block forged signatures.